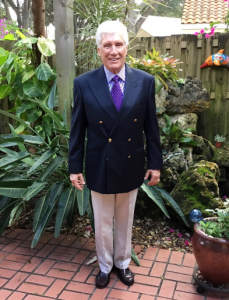 Bob was recruited by George and Athena Pappas about 15 years ago. During the first three years of his service, he was involved with the ministry but did not assume a leadership role within the organization until 12 years ago. Bob began getting involved more and more with the organization until he assumed the position of President. Bob was vital in the recruitment of Board members, many of whom were from First Baptist Church. With the help of the new Board, Bob began to pray and research how to procure the first home. The building of the first home started when the Lord led a very special donor to Protected Harbor who supplied a significant portion of the funds that the organization needed to begin the building process. During this time, Bob and George worked with the Florida Baptist Children’s Association to sublet property from McGregor Baptist Church site at $1 a year for 99 years. Bob quotes this time as “God opening the door for Protected Harbor.” With Bob’s construction knowledge, he helped with the design for the home. When it came to the building, Bob became the unpaid superintendent of the home, saving Protected Harbor many dollars.

More Board members were recruited and more ideas flourished. With the completion of the first home, Bob and his wife Pat then recruited Perry and Beverly Duncan to run the home as residents began to move in. By the grace of God, Protected Harbor opened its doors to its first home in September 2010. During this time, Bob was an integral component in all aspects of the home, including insurance, financing, etc.

In 2017, with the help of God, Bob and Protected Harbor moved forward with the development of a second home. Bob helped obtain the land, re-zoning of the land, and assisted in the intricacies of the final phases of the planning. Protected Harbor, with support from Soukup Strategic Solutions, obtained the necessary funds for the completion of the home. Because of funding requirements, Bob could not serve as the superintendent of the second project. That did not stop Bob from being deeply involved with the process. He was on the property almost every day ensuring that the process was running smoothly.

Thank you for everything Bob, you are a blessing to Protected Harbor and we appreciate your Presidency.