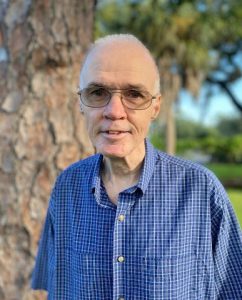 Our newest resident, Ken, comes to us from Michigan. He moved to Southwest Florida earlier this year with his oldest brother, Doug. Ken had previously lived in a group home and is excited to live in one again and hopes to eventually find a job, like he had up North.

Since joining the Protected Harbor II home, he has been embraced by the other residents for his calm demeanor and very sweet personality.

Because Ken has difficulty speaking, Protected Harbor Board member and Speech Language Pathologist, Alyssa Hayes, has already begun working with him regularly and finds him to be a good student.

Ken, the middle child of five boys, grew up happy and active as a child earning dozens of Boy Scout badges. He remembers his mom as a good cook and has wonderful memories of family meals. When both his parents passed, his brother, Doug, took the mantle of caretaker.

Now, Ken gets to create new moments with his Protected Harbor family. Ken has bonded with longtime Protected Harbor resident, Dennis, and the two of them can often be found sitting together on the front porch. Sometimes Ken and Dennis sit happily together in silence, while other times Dennis will regale him with stories and anecdotes about the Goodwill program, where Ken hopes to work soon. Ken usually responds by smiling and contributing an occasional word of interest. 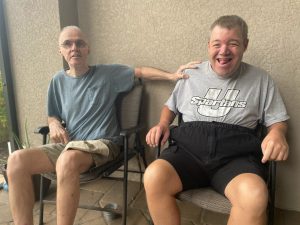 Ken sits with longtime resident, Dennis, on the front porch, their favorite spot of the house.

The house helped celebrate Ken’s 66th birthday on September 28, festooning the house with balloons and decorations. The celebration included his favorite foods like pepperoni pizza, cake, ice cream, and Sprite. He was surprised by his brother, Doug, who arrived with the gift of a recliner, a welcomed addition to his new room.

House manager Chadwick Duncan said, “It has been a pleasure having Ken come to live with us. He is a very warm and happy person with an endearing and calm demeanor. The other residents took to him immediately and he has fit right in. It has been a blessing for him and us.”